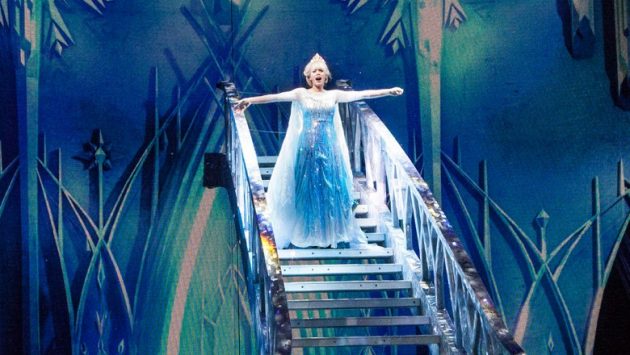 “For the first time in forever,” the magic and enchantment of Walt Disney Animation Studios’ Frozen comes to life with stunning special effects and outstanding talent during Frozen—Live at the Hyperion! This new live theatrical interpretation for the stage—now showing at Disney California Adventure park—immerses audiences in the beloved world of Frozen and takes everyone on the heartwarming journey of Anna, Elsa, Olaf, Kristoff, and Sven. Under the direction of Tony Award®-nominated director Liesl Tommy (Eclipsed), the show features elaborate costumes and sets, stunning special effects, and show-stopping numbers. This exceptionally large production features an opening cast and crew of more than 200, six full musical numbers, and a 2,220 square foot video wall, which all combine for an unforgettable experience.

Frozen—Live at the Hyperion is not simply a retelling but rather an adaptation that takes the essence of the adventures of Anna and Elsa and transforms it into a theatrical spectacular for the stage. Director Liesl Tommy explained, “I am approaching Frozen as I would any new work—to search the story for what resonates most emotionally, which is the story of the relationship between Anna and Elsa, their coming of age, and conquering their worst fears.” During the world premiere, Tommy expressed that the emotional center of Frozen is the metaphor of opening and closing doors in one’s life and understanding that truly, “love is an open door.”

Creative Entertainment Executive with Walt Disney Imagineering Dana Harrel shared, “This production is very emotional. We take our audiences to a place that we’ve never gone before, so the environment for this journey becomes vitally important to telling the story.” With this in mind, the scale of the Hyperion Theater means the theatrical effects in this production play a very large role. For example, it took approximately 45,000 square feet of custom-dyed fabric to create the “Aurora” curtain that envelops the interior of the theater. Also, an enormous turntable was installed on the stage to allow an elegant movement of set pieces from scene to scene and to accommodate Elsa’s breathtaking staircase of ice, which juts out over the audience. And, of course, the retelling of Frozen would not be complete without the falling of snow throughout the nearly 2,000-seat Hyperion Theater.

“We are using theatrical technology that simply wasn’t available when the theater opened in 2001, and some of it wasn’t even around five years ago,” explained the show’s producer Jennifer Magill. “This is especially true for the large amount of video projections.”

With the help of these of these cutting-edge special effects, guests visiting Arendelle can experience the tradition of outstanding live entertainment inside the Hyperion Theater at an entirely new level. The entire team of artists, designers, and performers have embraced Frozen—Live at the Hyperion as the first theatrical experience for many guests, especially children, and they made sure it will be an unforgettable experience for everyone visiting the Disneyland Resort.