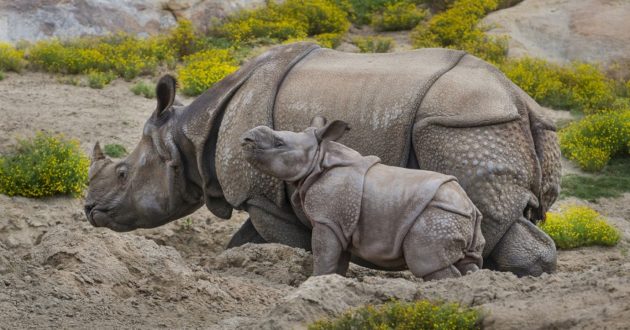 A 10-week-old greater one-horned rhino calf made his debut at the San Diego Zoo Safari Park today (Jan. 18, 2017), curiously exploring his new habitat while never venturing more than a few feet away from his attentive mother, Tanaya.

The male calf, named Taj—meaning ”crown” or “jewel” in Hindi—and his mother came out of a boma, a protected area away from other animals, where Tanaya gave birth to the calf Nov. 10, 2016. Mom and baby had been in the boma to properly bond before being let into the 40-acre Asian Plains exhibit, where the calf experienced many firsts—including climbing steep terrain, sliding on rocks, playing in a mud wallow, and bravely meeting a Malayan sambar deer face-to-face. Eventually, the calf will meet and interact with the four other female rhinos that share the habitat, including Taj’s almost 3-year-old sister, Petunia.

The greater one-horned rhinoceros differs from other rhino species, as it has an armor-plated appearance—but that “armor” is actually a layer of skin that has many folds. The greater one-horned rhino is listed as vulnerable on the International Union for Conservation of Nature’s Red List of Threatened Species, primarily due to habitat loss, poaching threats and illegal traffic in rhino horn. There are only an estimated 3,500 greater one-horned rhinos remaining in the wild in India and Nepal, with more than 70 percent of the population living in one reserve: Kaziranga National Park in India.

San Diego Zoo Global has been working for more than 40 years, along with other accredited zoos and the International Rhino Foundation, to keep a sustainable population of rhinos safe under human care while working to protect them in sanctuaries in the wild. Taj is the 70th greater one-horned rhino born at the Safari Park since 1975, making the Park the foremost breeding facility in the world for this species.

Rhinos are very important to the ecosystems in which they reside. Greater one-horned rhinos live in humid, swampy, tall-grass habitats in their native Asia. These large herbivores graze on the grass, which helps to maintain the habitat—increasing plant diversity and providing grazing areas for other animals. Rhinos digest large volumes of plant material and disperse the seeds in their dung, thus playing an important role in the health and maintenance of vegetation in their habitat. As rhinos disappear from their habitats, their absence impacts other species, such as birds, reptiles, mammals and plants.

Visitors to the Safari Park may see Taj and Tanaya roaming their Asian Plains exhibit, from a Caravan Safari or a Private Cart Tour.