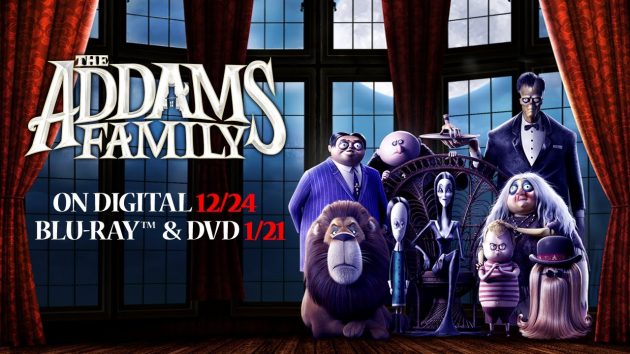 The Addams Family Animated Film on Blu-Ray, DVD, Digital and On Demand

Everyone’s favorite creepy and kooky family is coming home when the animated film, THE ADDAMS FAMILY, arrives on Digital December 24, 2019 and on Blu-ray, DVD and On Demand January 21, 2020 from Metro Goldwyn Mayer Studios (MGM) and Universal Pictures Home Entertainment.

THE ADDAMS FAMILY on Blu-ray, DVD and Digital showcase the wonderfully weird world of the Addams family with a variety of exclusive bonus features not seen in theaters including deleted and extended scenes, an interactive charades game with Thing, behind-the-scenes footage, music lyric videos and more!

Filled with wildly funny moments and a fresh take on the beloved characters created by Charles Addams, THE ADDAMS FAMILY celebrates the uniqueness of every family and delivers spooky fun all year long.

Welcome to the Family* – In this combined Making of/Character Profiles, we hear from the filmmakers and stars of The Addams Family about how the film came about, the animation process and insight into the characters.

Life of a Scene* – From black & white storyboards and layouts to animation and lighting, follow along with filmmakers as they bring to life a scene from the movie.

Charades with Thing* – There’s nothing quite like a game of Charades with your friends. But what happens when the person giving the clues isn’t exactly a person? What if he’s just… a hand? On talent day, stars of the film are invited to play Charades with Thing. Talent goes head-to-head, competing to see who can guess Thing’s clues. Graphics reveal the answers and keep score for each player.