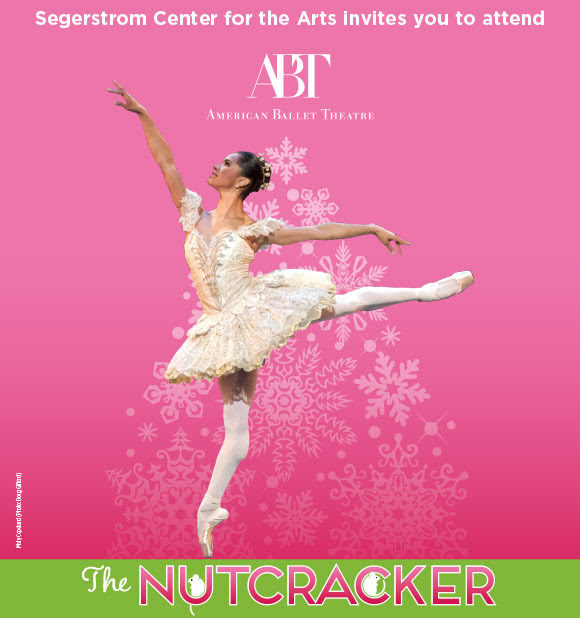 Starring Misty Copeland, Sarah Lane, Isabella Boylston, Hee Seo, Christine Shevchenko, Thomas Forster, Blaine Hoven, Cory Stearns, Joo Won Ahn, Aran Bell Music Performed Live by Pacific Symphony Photo by Gene Schiavone December 13 – 22, 2019 in Segerstrom Hall Tickets On Sale Now COSTA MESA, CA – Segerstrom Center announces the return of its popular holiday tradition – American Ballet Theatre’s captivating production of The Nutcracker. Co-presented by the Center and ABT with choreography by ABT Artist in Residence Alexei Ratmansky, The Nutcracker was praised by The New York Times as “A production like no other, made with complete theatrical authority from first to last.” The ballet will be given 12 performances December 13 through 22 in Segerstrom Hall. ABT Artistic Director Kevin McKenzie has released principal casting, which will include Hee Seo as Clara, the Princess and Cory Stearns as The Nutcracker Prince on opening night December 13.

Single tickets for American Ballet Theatre’s The Nutcracker start at $29 and are now available online at SCFTA.org, at the Box Office at 600 Town Center Drive in Costa Mesa or by calling (714) 556-2787. For inquiries about group ticket discounts for 10 or more, call the Group Services office at (714) 755-0236.

Principal Casting for The Nutcracker at Segerstrom Center for the Arts Artists and program are subject to change.

The Nutcracker is a beloved holiday story based on The Nutcracker and the King of Mice written by E.T.A. Hoffmann and set to a magical score by Peter Ilyitch Tchaikovsky. The Los Angeles Times declared Ratmansky’s production “an unreserved classic” and “ravishing and clever enough to inspire multiple viewings.” Scenery and costumes are by award-winning designer Richard Hudson (Disney’s The Lion King) and lighting is by Jennifer Tipton. Performances of The Nutcracker at Segerstrom are accompanied live by the renowned Pacific Symphony. Students from the American Ballet Theatre William J. Gillespie School at Segerstrom Center for the Arts will perform alongside the renowned ABT dancers in this classic tale that takes the young, romantic Clara and her Nutcracker Prince on a dreamlike journey.

The 2019 engagement of The Nutcracker continues an on-going relationship between Segerstrom Center and American Ballet Theatre. The Company has appeared at the Center since 1987. Important engagements include the world premiere of Mikhail Baryshnikov’s Swan Lake in 1988, the West Coast premiere of Kevin McKenzie’s new production of The Sleeping Beauty in 2007 and the world premiere of a new production of Firebird by Alexei Ratmansky in 2012. In 1999, ABT’s production of Le Corsaire was taped in Segerstrom Hall for broadcast on PBS’ Dance In America, winning an Emmy Award. In 2003, The Dream was also taped at the Center for broadcast on Dance In America. In 2008, the Center and ABT co-commissioned Twyla Tharp’s Rabbit and Rogue, receiving its world premiere in New York and West Coast premiere at the Center. Two more recent world premieres have also taken place including the 2015 presentation of ABT’s new production of The Sleeping Beauty, as choreographed by Marius Petipa with staging and additional choreography by Ratmansky, and 2017’s Whipped Cream, also choregraphed by Ratmansky, with design and costumes by pop-surrealist Mark Ryden. ABT’s opulent new production Harlequinade, newly choreographed by Ratmansky, received its West Coast Premiere in January 2019. ABT will premiere another full-length production choreographed by Ratmansky on March 5, 2020 at Segerstrom Center, inspired by the Greek romance novel Callirhoe by Chariton with music by Aram Khachaturian, arranged by Philip Feeney, and sets and costumes by Jean-Marc Puissant

The Center applauds special underwriting from Connie and Peter Spenuzza, the Huang Family Foundation and Tiffany & Co. The Center’s International Dance Series is made possible by the Audrey Steele Burnand Endowed Fund for International Dance and The Segerstrom Foundation Endowment for Great Performances. Segerstrom Center for the Arts thanks its corporate partners including Kia Motors America, Official Automotive Partner and United Airlines, Official Airline. COAST Magazine is the official media partner of the Dance Season.

American Ballet Theatre is one of the great dance companies in the world. Few ballet companies equal ABT for its combination of size, scope and outreach. Recognized as a living national treasure since its founding in 1940, ABT annually tours the United States, performing for more than 300,000 people, and is the only major cultural institution to do so.

Over nearly 80 years, the Company has appeared in a total of 132 cities in 50 countries and has performed in all 50 states of the United States. Under the artistic direction of Kevin McKenzie since 1992, ABT has recently enjoyed triumphant successes with engagements in Paris, Brisbane, Abu Dhabi, Singapore, Oman and Hong Kong. On April 27, 2006, by an act of Congress, American Ballet Theatre became America’s National Ballet Company®

Pacific Symphony, led by Music Director Carl St.Clair for the last 29 years, has been the resident orchestra of the Renée and Henry Segerstrom Concert Hall for over a decade. Currently in its 40th anniversary season, the Symphony is the largest orchestra formed in the U.S. in the last 50 years and is recognized as an outstanding ensemble making strides on both the national and international scene, as well as here in Orange County. Pacific Symphony is dedicated to expanding the orchestral repertoire— illustrated through its many commissions and recordings, in-depth explorations of American artists and themes. The Symphony’s innovative approaches to new works received the ASCAP Award for Adventurous Programming in 2005 and 2010. In April 2018, Pacific Symphony made its debut at Carnegie Hall as one of two orchestras invited to perform during a yearlong celebration of composer Philip Glass’ 80th birthday. The New York Times saluted Pacific Symphony as “excellent…a major ensemble.” The following month the orchestra toured China, and in June 2018 made its national PBS debut on Great Performances with Peter Boyer’s “Ellis Island: The Dream of America,” conducted by St.Clair. Presenting more than 100 concerts and events a year and a rich array of education and community engagement programs, the Symphony reaches more than 300,000 residents—from school children to senior citizens.

Segerstrom Center for the Arts is an acclaimed arts institution as well as a beautiful multi-disciplinary cultural campus. It is committed to supporting artistic excellence, offering unsurpassed experiences and to engaging the entire community in new and exciting ways through the unique power of live performance as well as a diverse array of inspiring arts-based education and community engagement programs. Previously called the Orange County Performing Arts Center, Segerstrom Center is Orange County’s largest non-profit arts organization. In addition to its six performance venues, Segerstrom Center is also home to the American Ballet Theatre William J. Gillespie School and the School of Dance and Music for Children with Disabilities. The Center presents a broad range of programming for audiences of all ages, featuring international ballet and dance companies, national tours of top Broadway shows, jazz and cabaret, contemporary artists, classical music performed by renowned chamber orchestras and ensembles, family-friendly programming, and free performances on its plaza, such as outdoor movie screenings, concerts, community and cultural festivals. Segerstrom Center is a leader among the nation’s performing arts centers for providing education programs designed to inspire young people through the arts. The Center’s programs reach hundreds of thousands of students each year in five Southern California counties. The CDI supports flagship artistic programming and a wide range of projects that celebrate innovation, nurture creativity and engage audiences of the future. The Center Without Boundaries develops partnerships with non-cultural organizations to help them in their own efforts to respond to the ever-changing needs of the community. Segerstrom Center for the Arts is also proud to serve as the artistic home to three of the region’s major performing arts organizations: Pacific Symphony, Philharmonic Society of Orange County and Pacific Chorale. Each contributes greatly to the artistic life of the region with annual seasons performed at the Center. In addition to Segerstrom Center for the Arts as a presenting and producing institution, it also identifies the beautiful 14-acre campus that embraces the Center’s own facilities as well as two independently acclaimed organizations: Tony Award®-winning South Coast Repertory and a site designated as the future home of the Orange County Museum of Art.