The Walt Disney Company today announced it is committing $5 million to aid in the reconstruction of Notre-Dame Cathedral in Paris following the devastating fire that severely damaged the historic landmark this week.

In 1996, Disney released “The Hunchback of Notre Dame,” an animated movie based on a novel written by Victor Hugo. Disney’s movie was nominated for an Academy Award for best music, original musical or comedy score. 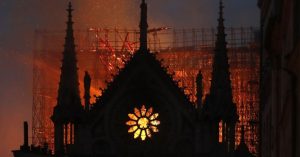 “Notre-Dame is a beacon of hope and beauty that has defined the heart of Paris and the soul of France for centuries, inspiring awe and reverence for its art and architecture and for its enduring place in human history. The Walt Disney Company stands with our friends and neighbors in the community, offering our heartfelt support as well as a $5 million donation for the restoration of this irreplaceable masterpiece,” said Robert A. Iger, Chairman and Chief Executive Officer, The Walt Disney Company.