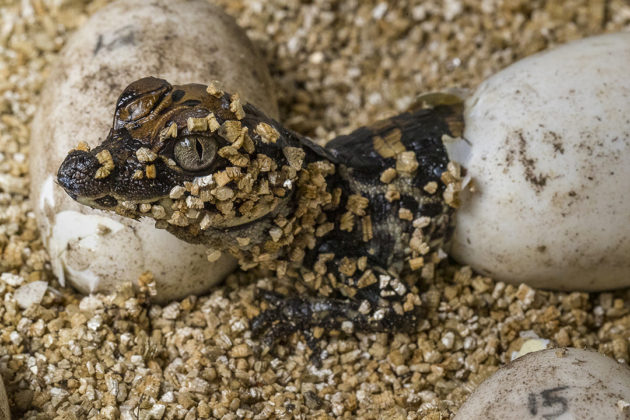 This morning (Monday, Nov. 6, 2017), eight West African dwarf crocodiles began to hatch from eggs at the San Diego Zoo’s Reptile House—the first hatching of its kind in the Zoo’s 101-year history. Three baby crocs successfully hatched on their own, keepers assisted a fourth one in hatching, and more were expected to emerge from their eggs throughout the day. The new hatchlings are being cared for behind the scenes—and the parents, an 11-year-old female named Yendi and a 50-year-old male named Kumba, can be seen by guests in the West African Forest habitat at Conrad Prebys Africa Rocks.

The eggs were laid by Yendi in the pair’s former Tiger River habitat on Aug. 13, 2017. To ensure their survival, animal care staff collected the eggs and carefully incubated them in an off-exhibit area, at 86 degrees Fahrenheit. Like other crocodilian species, the gender of West African dwarf crocodiles is dependent on egg incubation temperatures, with higher temperatures required to hatch males. Although it is too soon to tell whether the Zoo’s new hatchlings are male or female, reptile keepers hope to be able to determine the crocodiles’ genders in a few days.

West African dwarf crocodiles are listed as Vulnerable on the International Union for Conservation of Nature (IUCN) Red List of Threatened Species. There is little data currently available on this species in the wild, however, San Diego Zoo Global is supporting survey research in their native range to better understand the status of West African dwarf crocs.

Guests to the San Diego Zoo can see the world’s smallest crocodilian species—which can reach a length of about 5 feet—at the San Diego Zoo’s new Conrad Prebys Africa Rocks habitat, although the hatchlings will not be viewable until they are older and larger.