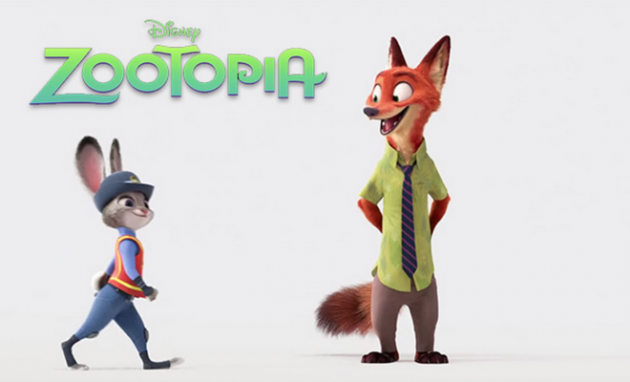 MASON:  We’re excited about Disney’s new film Zootopia!  The animal city of Zootopia, is a melting pot where animals from every environment live together in harmony.  Animals of any kind such as birds, dinosaurs, primates, reptiles, bunnies, elephants, foxes and more can be anything they dream of. There is a focus on the importance of taking action in order to realize your dreams. If you want something you have to work for it. Judy Hopps, a bunny has always dreamed of becoming a police officer and she works hard to make her dreams come true. Officer Hopps along with a fast talking fox become the target of a conspiracy and they’re forced to team up and discover even natural enemies can become best friends. Zootopia provides great entertainment along with a good lesson for anybody old enough to understand it. 1. Photo: Animal metropolis: Zootopia welcomes everybody to its fold with its mantra “In Zootopia, anyone can be anything”.

2. Photo: Shady looks: Mr. Big, the most fearsome crime boss in the city, is voiced by Maurice LaMarche.

www.santaanazoo.org  The Santa Ana Zoo, “Home of the 50 Monkeys,” will be celebrating its 64th wild animal birthday celebration on Saturday, March 5th and Sunday, March 6th, 2016 on the Zoo grounds from 11:00 am to 2:00 pm. Live music and entertainment are included in the cost of general admission.

You’re invited—join the celebration! The San Diego Zoo has a special year planned along with a big bash on May 14 at 6 pm at Balboa Park for a spectacular centennial event. The San Diego Zoo is 100 years old and it’s time to party!

Disney’s Animal Kingdom is the fourth of four theme parks built at the Walt Disney World Resort in Bay Lake, Florida. It was dedicated and opened to the public during Earth Day on April 22, 1998. It is the largest Disney theme park in the world, covering 500 acres. It holds the distinction of being the first and only Disney park to be themed entirely around animal conservation, a philosophy once pioneered by Walt Disney himself. Disney’s Animal Kingdom is accredited by the Association of Zoos and Aquariums and the World Association of Zoos and Aquariums, meaning they have met or exceeded the standards in education, conservation, and research.

MADISON: With so many options to see animals up close and personal we highly recommend that you take the time to go outside and see the critters of our world.